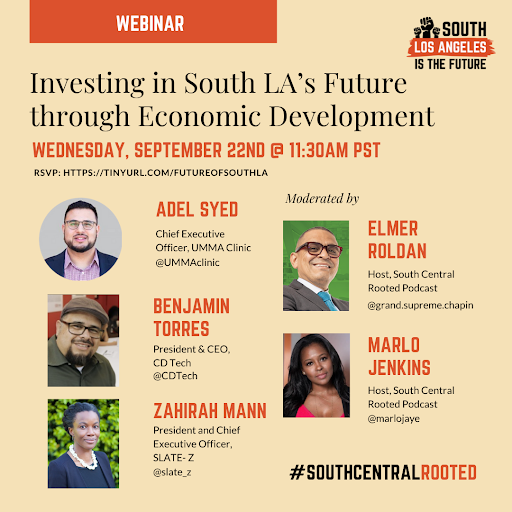 The economic instability in the nation continues to be a growing concern for many people as the pandemic continues to increase the disparity in wealth and access to financial security. The legacy of racism in economic advancement has been rooted in policies and practices within the workforce and within business development opportunities. During the pandemic, there has been an increased eagerness to rethink how the workplace and business development can provide a gateway to increase economic health in communities. In this episode, the panelists discuss the amplified workforce challenges due to the pandemic and the opportunities for the South Central community to maximize on recovery efforts from the federal to the local-level.

Mr. Syed holds a Master’s degree in Public Policy and Administration from Northwestern University, and a Bachelor’s degree in Political Science with an emphasis in Public Service from the University of California, Davis. Mr. Syed has also completed notable fellowships including the Blue Shield of California Foundation Clinic Leadership Institute Emerging Leaders Program.

Benjamin Torres is the President/CEO of the Community Development Technologies Center (CDTech), a nonprofit organization focused on addressing issues of racial equity and economic justice in low-income areas of Los Angeles. Benjamin’s entire career has been focused on placing the tools of democracy directly in the hands of our most marginalized residents through education, training, engagement and multi-ethnic/racial community building. He has developed efforts to create inclusive, democratic and power building strategies utilizing highly effective public, private, nonprofit and community partnerships. He is committed to progressive movement building efforts and serves on the Board of Directors of several key local and national organizations. He also serves as President of City of LA Commission on Community and Family Services and he also serves on the LA County Public Health Equity Task Force Commission.

As SLATE-Z’s President and CEO, Zahirah Mann leads the Backbone Team and guides partnership activities of the South LA Promise Zone through visionary and adaptive leadership. Zahirah is an accomplished non-profit professional who has led several successful initiatives to advance greater opportunities for Los Angeles residents.

Prior to joining SLATE-Z, Zahirah split her career between philanthropy and law. Most recently, Zahirah was a Senior Program Officer at The Ralph M. Parsons Foundation where she oversaw a diverse portfolio of grants that supported vulnerable children and families and led a strategic initiative focused on child welfare and wellbeing. Within that work, she helped launch and led Foster Together Network, a collective impact effort aimed at addressing child welfare concerns throughout LA County, engaging hundreds of stakeholders who represented county departments, elected officials, foundations, non-profits, faith communities, caregivers, and youth. Zahirah also held program staff positions at the Annenberg Foundation and United Way of Greater Los Angeles, where she managed capacity building and collective impact efforts. Before entering philanthropy, Zahirah worked as a public interest attorney, representing and advising for-profit and non-profit entities, coalitions, and governmental agencies on large scale, systemic issues that impacted families, youth, and businesses. She also advised organizations on business formation and governance issues. As an attorney, Zahirah has represented groups throughout South Los Angeles and the surrounding area, working for such entities as Legal Aid Foundation of Los Angeles, the Natural Resources Defense Council, and Strumwasser and Woocher LLP.

Zahirah earned an A.B. in Political Science from Vassar College and a J.D. with a specialization in environmental law from Tulane University Law School. She is a former AmeriCorps member with a passion for facilitating deep community change and mentoring rising leaders. When not leading efforts in the nonprofit, philanthropic, legal, or broader civic community, Zahirah can be found exploring the beaches, mountains, and flat lands of California or traveling throughout the world.